Today the votes will are being counted in the Lib Dem leadership election. We expect to announce the result on Twitter and Facebook at around 5pm, but you won't see any updates whilst the count is in progress.

With that in mind, we wanted to give you a bit more information on what is happening at the count today.

Ahead of the count, the ERS opened all of the returned envelopes, and put the votes into batches of 100 ready for counting.

The count is conducted by ERS staff as is supervised by a small team from party HQ (Tim Gordon our CEO, Darren Briddock from the party's compliance team and Austin Rathe form the membership team) along with the agents and additional observers from each of the two campaigns. The count is a sterile environment, so representatives from both campaigns will have to hand in their mobile phones before entering the count area - hence why you won't hear anything during the count! 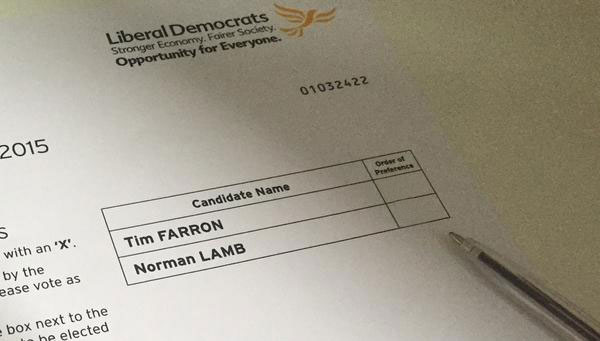 The count has commenced with all the batches of 100 being combined together and then counted into two piles, according to which candidate has the first preference for each vote. At this stage doubtful or unclear ballots will be separated and adjudicated on by the returning officer, just as they in a normal political election. The campaign team's observers can point out and challenge ballots, but the returning officer's decision is final.

With only two candidates there will of course be a result after one round of voting (unless there is a tie, in which case we will draw lots). Once the count is finished the two agents will be informed of the result, and they wil in turn inform their candidates. The party will announce the result very shortly afterwards - we expect this to be at around 5pm.

The new leader will then make their first public appearance at the rally in central London at 6pm. We're hoping to be live streaming the event and a link will be in the email announcing the result. We'll then be putting a video of the speeches from the event on our YouTube channel tomorrow morning.

It's going to be an exciting evening, and whether you're able to come to the rally tonight or not, thank you for taking part in what I know is going to be an important moment in our party's history.